Posted in Inspiration Compositing Live Action After Effects by aescripts + aeplugins on December 23, 2016

IBM is a huge company, with employees around the world who do a daily commute. From this simple reality springs the concept for a series of 360 videos, each one following an employee commute. The first one follows IBM Developer Gabriel Rosa and his colleague, Khaly Ketoure, as they ride from the Bedford-Stuyvesant neighborhood, through Williamsburg, and cross the Williamsburg Bridge into Manhattan. David Hughes, Social Content Producer, IBM, worked with his team to develop the overall concept and produce the 360 video. A relative rookie in both After Effects and 360/VR production, David used Mettle SkyBox Studio for the post-production. He also used some pretty clever DIY techniques, which he explains in the Q&A below.

Gabriel carries a bouquet of flowers that conceals the 360 camera. 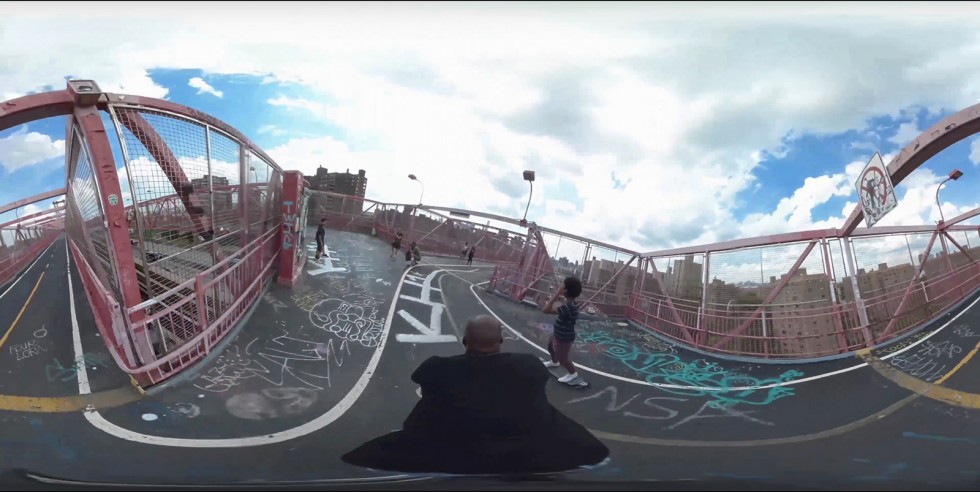 How did your team at IBM come up with the idea of showcasing 360° video commutes?

After completing several very successful 360 projects using Skybox Studio for After Effects, I was quite involved in researching everything 360 and was busy sharing all sorts of vids with my colleagues on the creative team. One of those vids was a cool, soft marketing vid from Mercedes Benz – Loki 360° Experience. (Which also happened to be produced with Mettle SkyBox Studio.)

Michael Gramaglia, the Film Director on our team called on me to discuss an idea he was pondering. He had seen the Mercedes vid and and it inspired him to think about ways to incorporate movement into our next 360 project and he knew exactly how to do it. Being that IBM is a global company with employees on every corner of the globe, he realized we had a deep resource of stories to tell in quick, bite size 360° videos. It was pretty darn brilliant. Every day people get up and commute to work. Each one of those commutes may seem quite dull and uneventful to the one commuting. But a journey to work in Brussels is radically different from the commute in Bangalore. So we decided to begin a 360 series of IBM Commutes. The first of which is one right here in NYC. 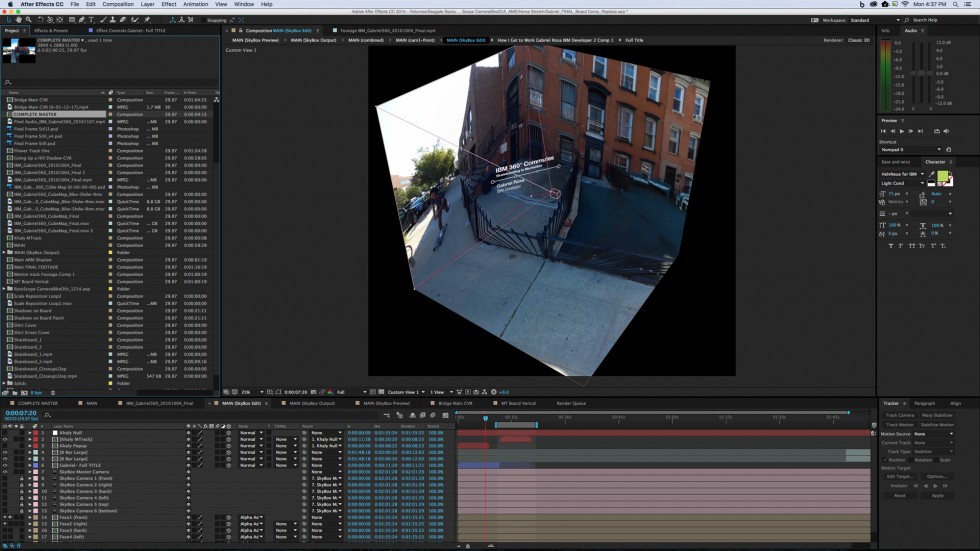 Placing the animated title into the opening scene using Skybox Studio in After Effects.

After arriving in Brooklyn that morning, our small cast and crew discussed the shot list and planned out the day on Gabriel’s front stoop. The temperature was already in the low 90’s at 9 am, so I knew this was going to be a rough day. I quickly dampened the spirits of everyone when, as some sort of bizarre rallying cry, I mentioned that this will be a really fun shoot… for about a half an hour, after that it would pretty much suck for everyone. Adding that if we do our best to power through it, we will have some really fantastic footage and an even better final film. By lunch, and still not yet out of Brooklyn, we were all cranky, tired and hungry. Understandably, Gabriel was completely gassed. I backed up some footage while we ate and showed everyone some of the better clips. This, and the bottomless lemonades seemed to energize us all as we paid our bill and looked forward to reaching the bridge. 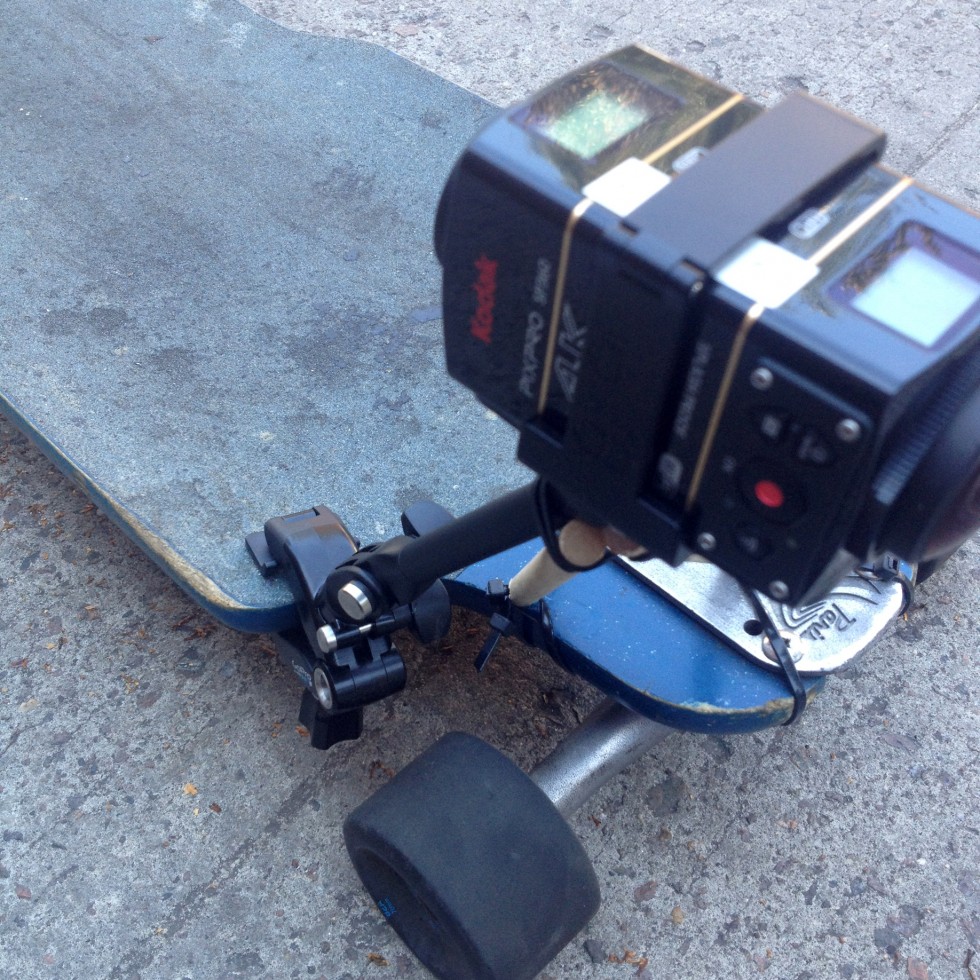 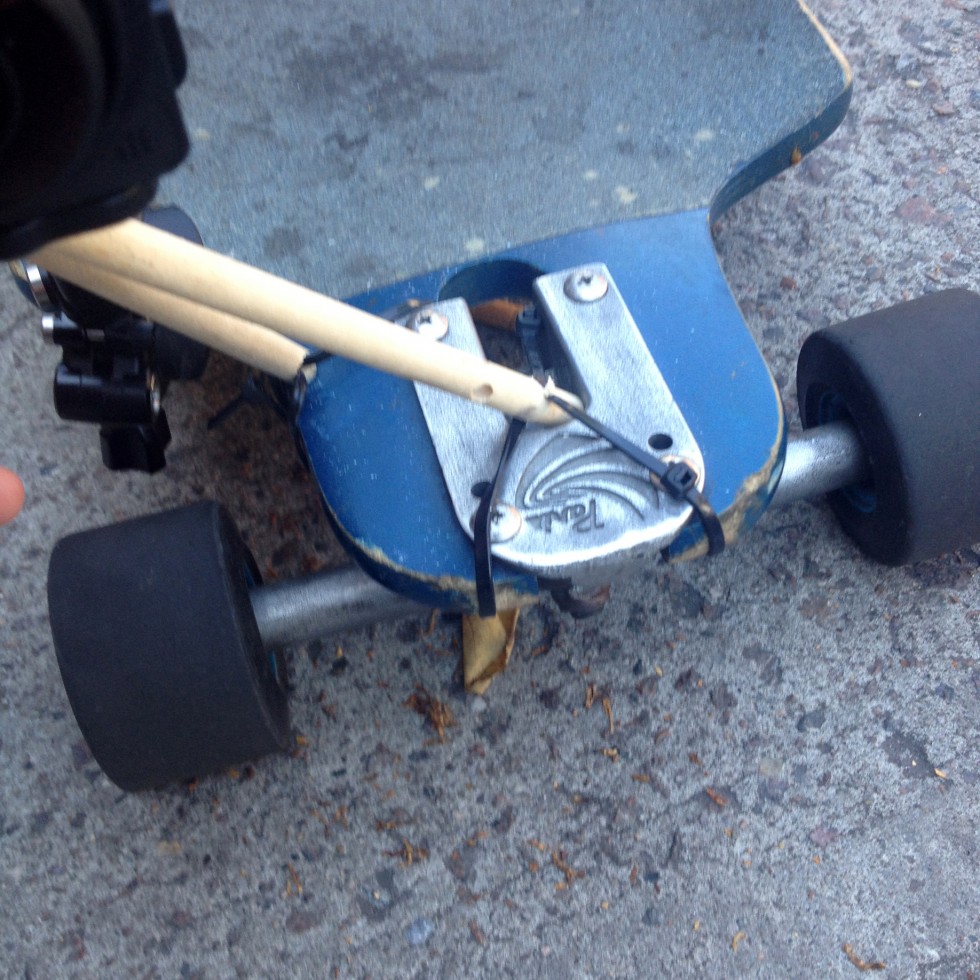 Our awesome and completely high tech solution for mounting a 360 camera to a skateboard. I took these photos to help me remember how I did it when I had to remount later in the shoot. Does the inventor of Zip-ties have a Nobel Prize yet? – David Hughes, 360 Producer, IBM

What were some of your challenges you faced on the shoot?

One of the more challenging aspects of shooting 360° is the fact that there are drastically more camera sight lines to consider while recording. The lack of a “behind camera” presents an additional wrinkle into every take, and coordinating suitable hiding places is not something that is typically considered on a normal shoot. This includes not only for crew members, but for additional cameras. This problem was especially significant when we began shooting the bridge segments. We decided that we would like to get at least 3 camera views shot, but could not have the camera mounted to the bicycle at the same time as one mounted to the skateboard. Those cameras would see each other. And being that my post production skills had not yet been tested, we decided to shoot the bridge segment 3 times, which required removal and remounting of the camera for each pass. (This is why I took photos of my zip-tied camera rig on the skateboard. I knew that I would want to remount the camera to the board when we got to the bridge, and I needed to remember how I did it.) After two passes over the Williamsburg Bridge, one with the camera on the bicycle and one with the camera mounted to the board, the humidity and the heat persuaded us to skip the 3rd selfie stick crossing and save that for the final take in Manhattan. 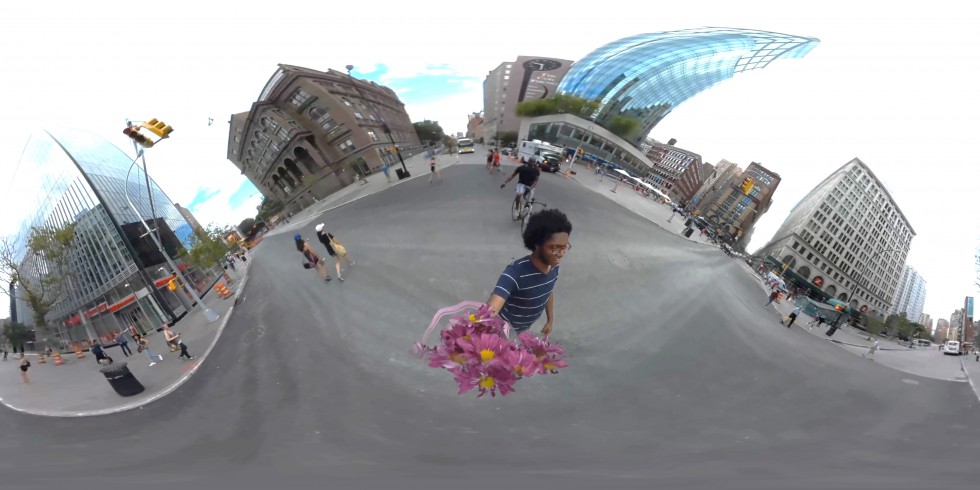 After nearly 9 hours in the hot sun, a happy Gabriel reaches his destination.

How did you come up with hiding the 360 camera in a bouquet of flowers?

This was a topic of discussion Michael and I had for quite a while, and finally decided it would be a fun way to solve a problem. I knew that I would be spending a great deal of time in Skybox Studio stripping the camera rigs and shadows from the footage. But there would be absolutely no way to convincingly get rid of the selfie stick Gabriel was holding. Even if I could, we couldn’t have him just holding his empty hand out. That would have been worse than seeing the selfie stick and giving up on magic. We asked Gabriel if he would feel weird skateboarding through lower Manhattan holding a bouquet of flowers. And as usual, he was positive and all for it. So after more than 7 hours in unbearable heat, our talent welcomed the additional role as cameraman and was more than happy to hold some flowers while doing it.

Congrats on this 360 video! We look forward to seeing more in your series. – Mettle

Raw footage of the skateboard before using Skybox Studio to fake the front of the board. 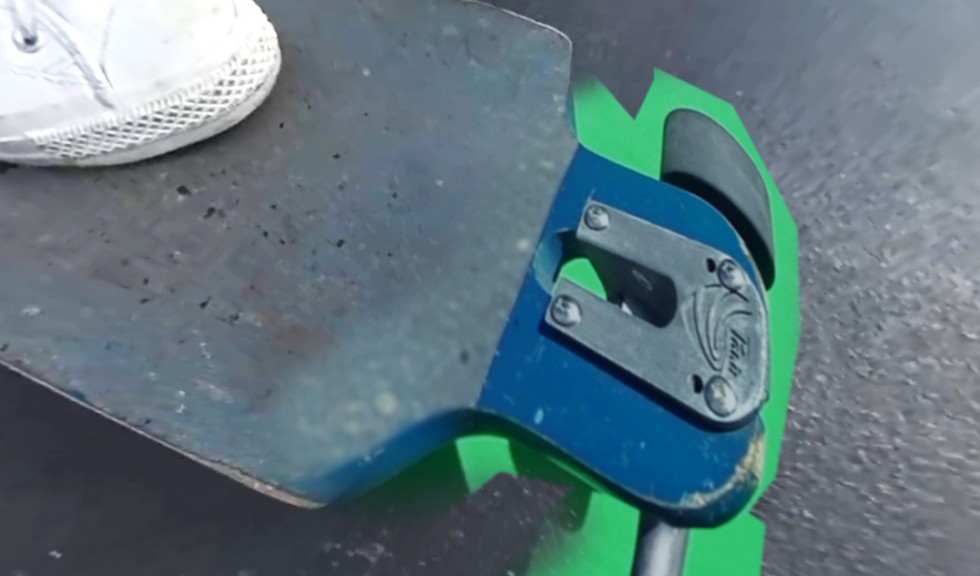 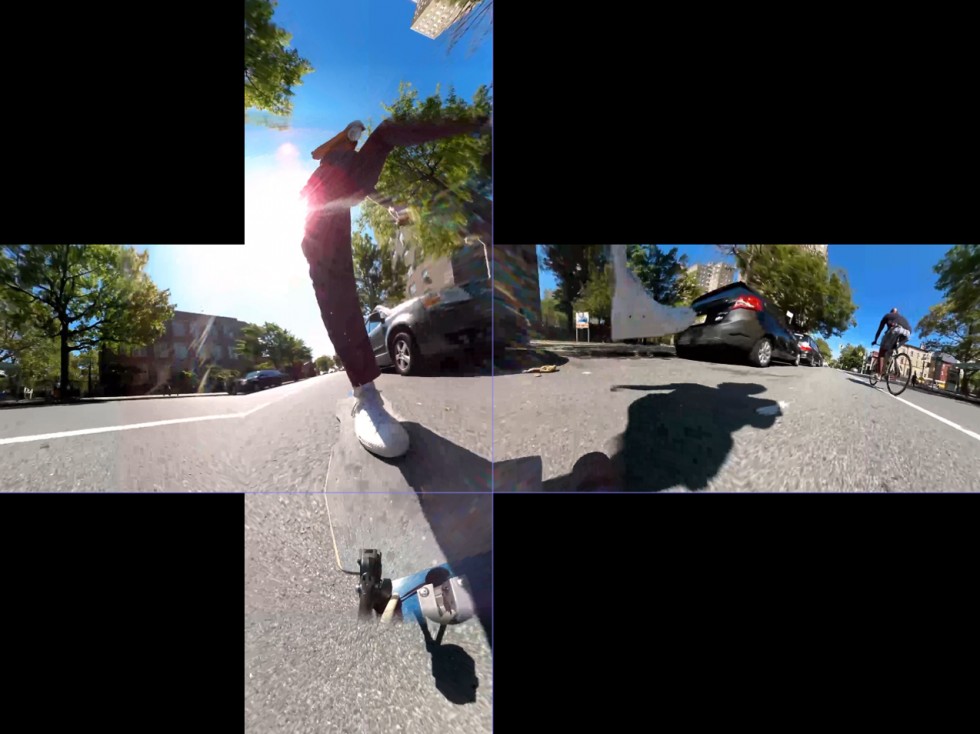 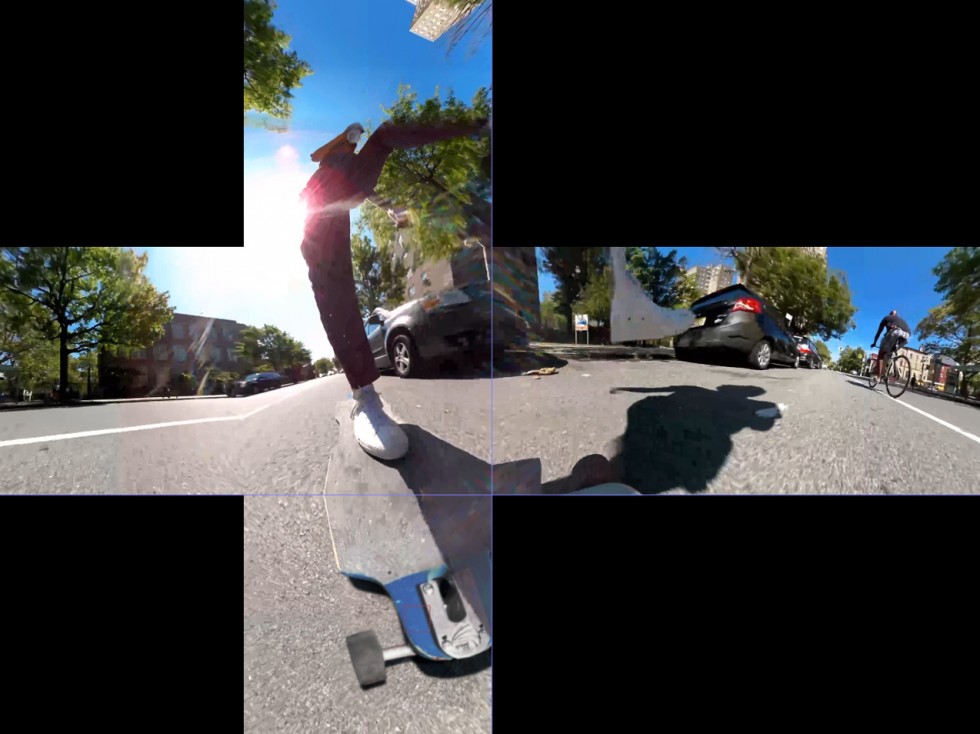 Before and after dropping the board loop into the comp using the Skybox Studio cube map.

Looking down on the skateboard after camera rig removal and replacement.