Posted in Interviews Design After Effects Cinema 4D by aescripts + aeplugins on June 20, 2017

Tell us a bit about yourself, how you got started in the business.

I grew up in a small city in the eastern part of Norway called Kongsvinger, about 100km from Oslo. I initially had a dream about becoming a professional hockey player, but at the age of about 14 I discovered the internet. Growing up being exposed to a lot of art and art-culture as well as getting my first computer at age 7, I found myself being fascinated and interested in how websites were designed and developed.

This interest then evolved more towards graphic design and identity as I started studying media and communication in high school, where I had a few fantastic teachers in the areas of design and film. I started playing around in After Effects around 2001 and was instantly hooked and fascinated by the possibilities of animation. Or graphic design in motion as I saw it.

After highschool got accepted at Hyper Island (hyperisland.se) and got a 7 month internship at Shilo, New York (shilo.tv), which really defined a lot in terms of how I look at motion design today. Huge thanks to André Stringer and the people who were at Shilo back in 2005!

Since then, I’ve been lucky to have worked with people in several great design studios here in Oslo including Bleed, Scandinavian Design Group and Toxic. Today I work at Apt, a design and technology oriented studio here in Oslo. I also get to do work and do projects under my own brand from time to time.

Your work is a beautiful balance of photographic and clean graphic style. Where do you get your inspiration?

Thank you! I started to do photography around the same time I was deeply into learning graphic design — and the two fields have always played an important role and followed each other in much of the work I do. In general, I think my somewhat perfectionistic approach to design end up defining my style a lot in terms of coming through as clean.

Early on, I remember being very inspired by the Danish photographer and later director Simon Ladefoged (simonladefoged.com) and his minimal perfectionistic photographic style with clean lines, straight angles and tight compositions. This was around the same time as designers and studios like Universal Everything (Matt Pyke), GMUNK (Bradley Munkowitz) and dform1 (Anders Schroeder) were blowing every young designers’ mind with their work, including mine, which they still do.

Nowadays there’s many great artists I follow and admire — too many to mention here, but have a look at who I follow on Behance or Vimeo.

I also find inspiration in everything from nature, physics, systems and architecture, to sound, music, games and contemporary art. Then there’s also sites, events and communities like aescripts+aeplugins, Motionographer, OFFF, From Up North, Wine after Coffee, Stash Magazine, Greyscalegorilla, Behance and many others. 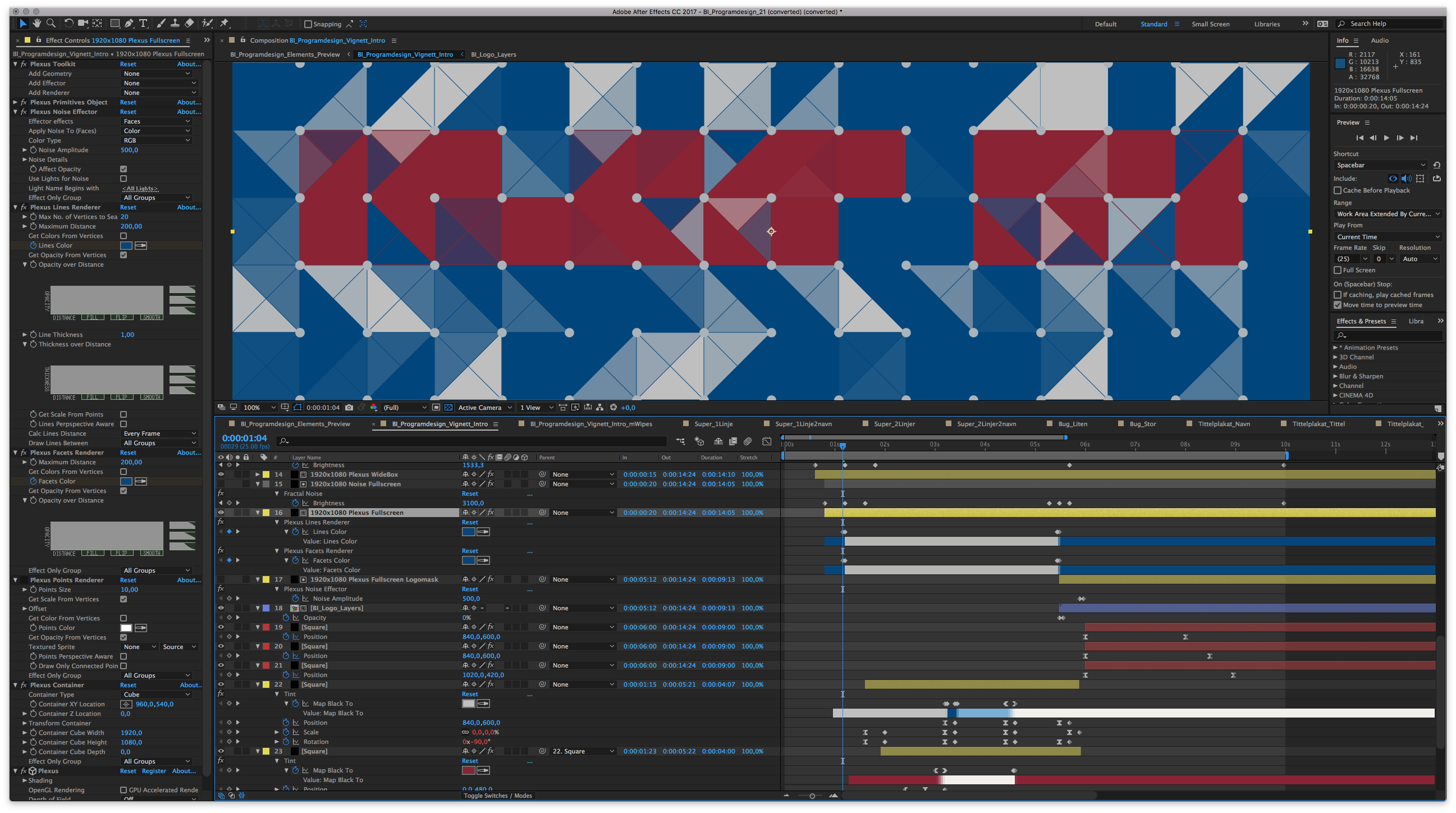 Do you have any favorite tools or workflow tips that help you create your work?  Can you share any "in-progress" or project UI shots?

I spend a lot of time inside Adobe After Effects, Maxon Cinema 4D and Adobe Illustrator, but I also do a lot of writing in the early stages of production. Writing synopsis, treatments and scripts — defining ideas and directions as well as communicating clearly “why” is a big part of my work.

There’s always new software and tools being released that I want to learn, but I’ve spent a lot of time with Plexus and Stardust lately. I love generative systems and rigs that create objects or drive animation.

You have a very accomplished career, any tips you can share with young motion designers that are just getting started?

I would say find a mentor or someone with more experience than you who have time to share what they know. I’ve been lucky to have met several great mentors during my career this far, who have taken the time to share their knowledge, challenge me and constructively criticise my design or ideas. Be prepared to make mistakes — own them and talk about them.

Learn the basic design principles and see a lot of design in other areas than motion design. Make sure you love it enough, cause you will experience many late nights of working and adjusting to constant change. Also, don’t be afraid not to specialise in a style or medium. That’s the beauty of knowing how to design, you can apply it in many different fields using many different techniques.

Then there’s the big one, as Simon Sinek would say; Always ask “why”. As motion designers we’re here to communicate something, that being a brand, a product or a message. So let that dictate how you’re going to design and animate to make it heard by the right people and add more value to it. But off-course, bring your own flare and style to it!

(this piece is probably a bit dated, but went viral back in 2011 and is a mix of what I still love doing)
http://kimholm.com/matta-release-the-freq

See more of Kim's work on his site: http://kimholm.com/

Tags:
← Previous in News
Next in Inspiration →